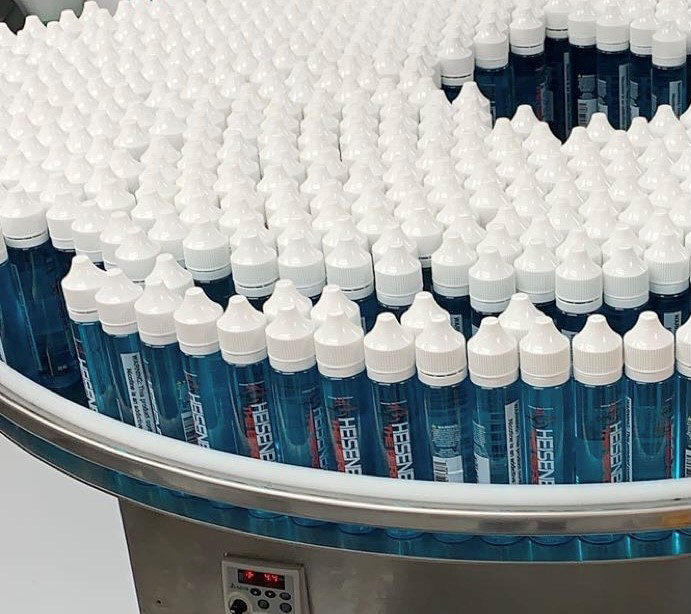 Ejuice Magazine: Can you introduce yourself and give us a little bit of your background?

Jeff Connell: I’m Jeff Connell, Co-Founder of Innevape, along with my business partner Tom Klingensmith.  I was a professional musician (guitar/vocals) and chain smoker for the majority of my adult life. My band BADDAX released 4 albums in the mid 90’s, with a minor hit in 1995. I also spent a few years becoming a screenwriter, and penned 7 scripts including one which I had a development deal for with a major studio. In October 2007 while working on a script, I was suddenly struggling to breathe. About an hour later, I found myself on the floor with my wife frantically trying to revive me while screaming to 911 on the phone. Needless to say, I knew I could never smoke another cigarette, so the next day I bought my first e-cig, and never looked back. I am now celebrating 13 years smoke free as a proud vaper!

Ejuice Magazine: How were you introduced to the vape industry, and what made you want to get into the industry?

Jeff Connell: Obviously, almost dying because of smoking cigarettes was the beginning of my journey.  After trying the existing liquids on the market back in 2007, and tasting how awful they were, I was convinced there had to be a way to make liquids that I could actually enjoy.  I started learning to make my own liquids, and in the process introduced Tom to vaping.  Once we both successfully stopped smoking by vaping, we became passionate about sharing this gift of life we had discovered with others.  I used to make liquids and carry around cig-a-likes in my car just so I could give them to any smoker I met.  I had no thought that this could become a business!  So many people kept telling me that I should sell my liquids, and I always dismissed the idea.  Finally, I talked with Tom, created a business plan, and we decided to go for it.  If you had told me back then that Innevape would be selling our liquids worldwide, and our liquids would be top sellers in every country we’re in, I would have laughed at you.  It’s amazing how Innevape has grown, and it’s humbling to know that we’ve been able to help so many people change their lives and leave combustible and smokeless tobacco behind.

Ejuice Magazine: We interviewed Innevape back in 2018. Can you tell us a little bit about what has changed for you since that last interview?

Jeff Connell: A lot has changed!  We have experienced exponential growth over the last 3 years. We are extremely thankful for that, as well as very proud of what Innevape has accomplished.  We have an amazing team that has worked so hard to make Innevape all that it has become.  I can’t adequately express how impressed I am daily by our production and shipping team members, our managers, our administrative personnel, our directors, and our compliance team.  Tom and I started Innevape and put in the long hours to put us on the map, but our team has taken us to where we are today.  We could have never accomplished this by ourselves.  Innevape was enshrined this year as the very first inductee into the Vapouround Hall of Fame.  That was such an incredible honor, and it would not have been possible without the team we have. 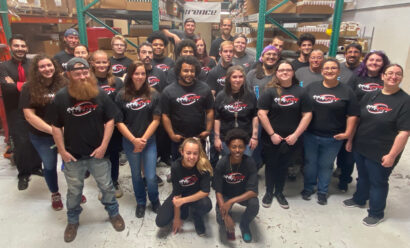 Ejuice Magazine: What is your favorite Innevape flavor and why?

Jeff Connell: My favorite flavor and all day vape is still Vape My Day – the first flavor I ever created!  Most people expect me to say Heisenberg, and of course I love Heisenberg and Heisenberg Menthol just as much as everyone else, but I’ve always been more of a savory/dessert guy, so for me Vape My Day has always been my favorite.  It’s difficult to choose sometimes because we have so many great flavors.  Carousel is our cotton candy with tropical fruits, so sometimes I really crave that sweet burst of flavor.  In the summer I love our green apple menthol called Chill Out and Whatamelon and Whatamelon Menthol, our pure watermelon flavors – so refreshing!  And of course, sometimes I’m wanting a true tobacco, so our TNT and TNT Gold hit the spot.  Bottom line though, I’m a Vape My Day guy! 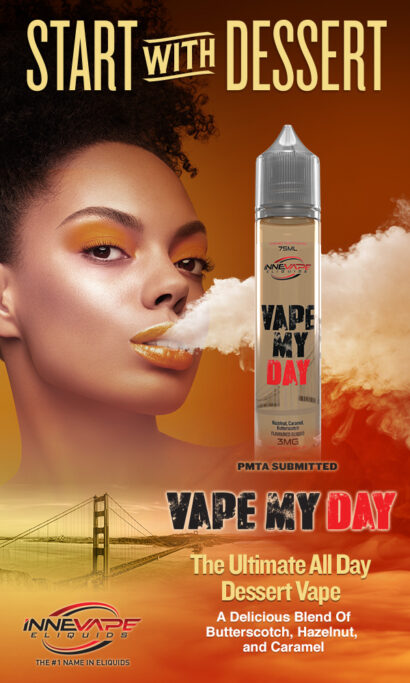 Ejuice Magazine: How has the recent changes to the industry affected the way you are getting your product to your customers?

Jeff Connell: We built Innevape by serving stores directly.  When others were chasing distributors right out of the gate, we chose to build great relationships with store owners and managers, which helped us build great relationships with the most important people in our industry – the vapers!  As we’ve grown, and also because of the PACT Act, we are now shipping large orders to distributors, and asking them to serve the many wholesale customers we’ve worked with for years.  Because of the strong relationships we’ve built with distributors like Midwest, we have been able to refer all of the customers we served directly for years, to a distributor near them.  This provides a variety of options so store owners and managers can buy anything through a distributor that they would have previously purchased directly from us.  The transition has gone very smoothly, and our team made sure to let all of our direct customers know that they can still contact us at any time if they need help finding our products, or have any challenges.  We’ve been preparing for all of these changes for quite some time, including the PMTA process.  While others in our industry have either hoped the regulations would not come to fruition, or dug in their heels in defiance, we simply prepared, so none of this caused any interruption in providing the outstanding service people have come to expect from Innevape. 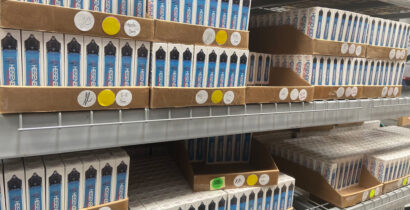 Ejuice Magazine: Where do you see the vape industry going in the next five to ten years?

Jeff Connell: Certainly it’s going to change.  Sadly, there will be some great manufacturers who won’t make it through the PMTA process.  We know and respect so many people in this industry, and have always felt there is more than enough room for all of us to do well, and most importantly provide people who want to quit smoking with lots of options so they can find a flavor that works for them.  It’s tough to realize that not everyone will make it through, but we still feel the future is bright for vaping and the vape industry.  Our hope is that the US will eventually catch up with the UK and other parts of the world in understanding that vaping is the absolute best alternative to help people stop smoking, and will eventually be supported as the life changing technology that it is.  That will take some time though.  Even as that unfolds, I don’t see the industry slowing down at all.  There may be fewer manufacturers and distributors, but the ones that remain will continue to grow and be able to meet the needs of vapers.  I guess we see things a little differently, because while others are proclaiming doom and gloom, we truly believe that the best days are ahead for our industry, as well as for vapers. 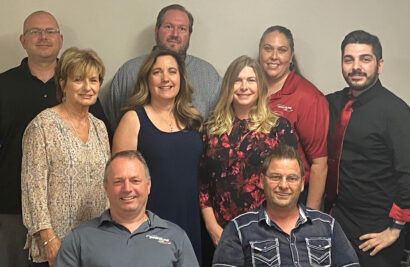 Ejuice Magazine: Is there a message you would like to send to all of your customers?

Jeff Connell: Thank you!! That sentiment isn’t nearly enough, but from the bottom of our hearts and souls – everyone at Innevape is beyond thankful to work in an industry that we love, that changed our lives, and that we know is making a difference in the lives of individuals and families throughout the world.  It is an honor to work with our distributors, all of the store owners and managers, and all of the vapers who are the #1 ambassadors for vaping, because they are the ones telling their friends and family how vaping changed their life.

Ejuice Magazine: It’s clear you really value your customers. What would you say to a smoker who is considering vaping and trying your E-liquid for the first time?

Jeff Connell: I would tell them my story.  I would tell them what it feels like to be laying on the floor dying, what it feels like to hear the panic in my wife’s voice, what it feels like to realize that you may be living the final moments of your life, suddenly realizing all of amazing moments you’re going to miss with your children, grandchildren, brothers, sisters, parents, and friends.  Honestly, while we, of course, want people to love Innevape liquids and use them to stop smoking, we don’t care one bit if it turns out that someone finds another brand or flavor that can help them.  We started Innevape with one singular goal – to help people stop smoking.  That’s all we want, so I would tell them what to expect when they first start vaping, tell them I will be there for them any time day or night if they need me, and I would do anything I could to help them be successful and put that nasty, stinky, old habit away for good! 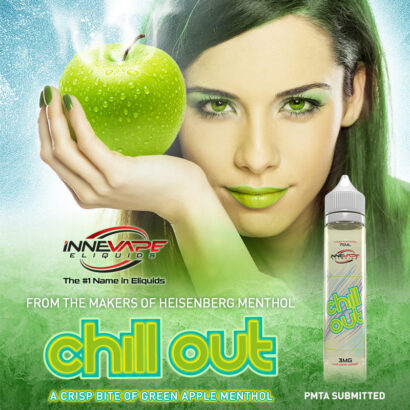 Jeff Connell: I would like people to know that we care deeply about them. It’s so easy to become detached as a business grows larger, and it’s easy for people to assume that once a business is successful, that it all becomes about money.  I’m thankful for the life I lead today, but I fully understand that I am standing on the shoulders of giants.  Those giants are the many people who gave Innevape products a chance.  Whether they gave us a chance by stopping by our booth at a show back in 2013 and 2014 when we first started on the show circuit, or gave us a chance when I walked in their store and asked them to offer Innevape to their customers, or gave us a chance by distributing our products to all the stores they have served so well for many years.  Without the vapers, the store owners and managers, and the distributors, Innevape would not be where we are today.  We will never forget that – we will never forget that service and quality matter more than anything else – and we will never forget that Innevape solely exists to help people.  All of that may sound like a list of cliches, but they’re not to me.  Our past exists because people gave us a chance, and our future will be determined by remembering that and taking care of those people, and the people we will serve in the coming years. Thank you for giving me the opportunity to share the heart of Innevape with you and your readers!