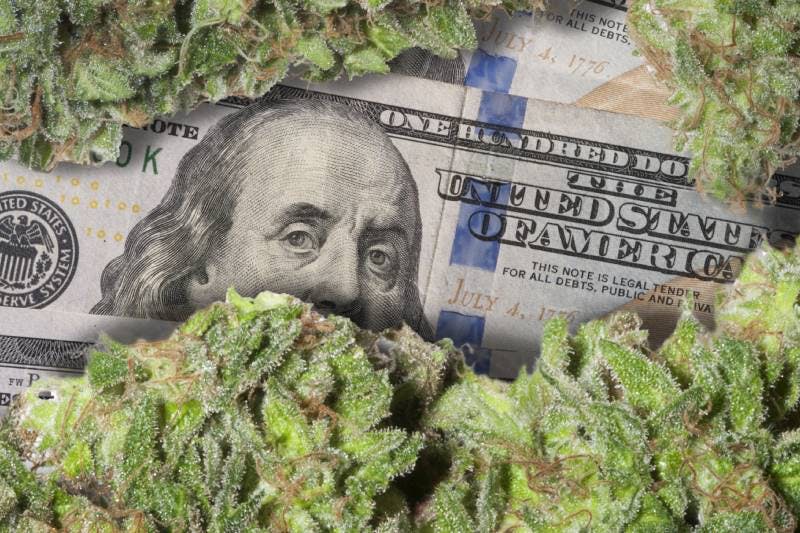 A long-awaited cannabis legalization bill sponsored by three high-profile Senate Democrats was finally introduced Thursday. The bill, which has little chance of passing, contains several provisions that would especially affect people who vape cannabis or use hemp-derived cannabinoids.

Sen. Schumer is a weird choice to serve as the face of cannabis legalization. While Sens. Wyden and Booker have been consistent opponents of cannabis prohibition and punitive drug laws, Schumer was, until recently, a gleeful drug war supporter. (He has also been a consistent and vocal backer of any and every nicotine vaping ban and restriction proposed in Congress.)

The CAOA has been a long time coming. A 163-page draft version of the bill was shared last summer, and has now nearly doubled in size. The final version is 296 pages, which includes 71 pages of federal regulations for cannabis businesses to follow—on top of the state rules they already deal with.

Because Senate passage of the bill would require 60 votes, and Democrats have just 50 seats (plus the tie-breaking vote of the Vice President when needed), the bill has little chance of passage, especially with many Republicans still questioning whether cannabis should be legalized at all. The CAOA, by the way, would not force any state to legalize cannabis sales; many will likely maintain prohibition.

But even as a starting point for negotiations, the CAOA has numerous flaws that will be especially apparent to current cannabis vapers and anyone who has watched the FDA regulate tobacco and vaping products.

This article is not a comprehensive summary of the CAOA, but rather a summary of questionable parts of the bill, largely from a vaper’s perspective. For a more thorough look at the many components of this complicated bill, there are excellent articles in Marijuana Moment and Cannabis Business Times. Jacob Sullum’s Reason article, while not a comprehensive overview, is also a must-read.

How does the FDA Center for Cannabis Products sound?

The CAOA hands regulation of cannabis to the Food and Drug Administration (FDA), creating a new FDA center similar to the Center for Tobacco Products (CTP). The new FDA Center for Cannabis Products would set product and labeling standards and determine allowable advertising and marketing rules.

To Sen. Schumer, this is a no-brainer, since he believes federal bureaucrats should control almost every aspect of our lives. But to vapers who watched in horror as the CTP bungled every aspect of regulating tobacco and nicotine products, the idea of FDA cannabis regulation will be terrifying.

The FDA would use the same standard when applying new rules for cannabis that it currently does for nicotine products: “appropriate for the protection of public health.” It doesn’t require a visionary to imagine how an FDA center in charge of regulating mind-altering drugs might handle the job.

In 2014, when the CTP published its draft vaping product regulations, the vaping industry served a thriving consumer-driven market, dominated by thousands of small vape shops run by proud entrepreneurs. Then the FDA imposed utterly pointless regulations, unaffordable to nearly all except major tobacco companies. Now the nicotine vaping market is beginning to devolve into a collection of black and gray market products, sold mostly in convenience stores.

Nothing is more likely to encourage the marijuana black market to remain strong—or become stronger—than putting the FDA in charge of regulating the legal market. The more nit-picking rules, pointless red tape and extra compliance costs the FDA tacks on to an already complex legal market, the greater demand will be for high-quality illegal weed.

Cannabis vape flavors would be banned from day one

The bill wastes no time in addressing flavors in vaped cannabis products; it would ban them from the start. Although the bill only refers to “characterizing flavors” and names several examples like menthol, mint, chocolate and various fruit flavors, the wording says, “shall not contain an artificial or natural flavor (other than cannabis) that is a characterizing flavor.”

In cannabis oil processed for vaping with solvents like butane and CO2, the natural terpenes and flavonoids are stripped from the raw cannabis. Without adding flavors after processing, the resulting product has no flavor at all. Manufacturers commonly add natural terpenes from other sources to give their vape carts flavor.

Are terpenes added after the oil is extracted from the plant considered characterizing flavors? Some have recognizable lemon, orange or berry flavors. We don’t know the answer, but we know who would decide if the Schumer bill is passed: the FDA.

Delta 8 would be treated under the law like marijuana

The 2018 Farm Bill legalized hemp (and all of its extracts and parts) as long as it contains 0.3 percent or less delta 9 THC. That allowed a small industry to grow and thrive, selling products made with legal hemp-derived cannabinoids like delta 8 and delta 10 THC and HHC. A recent federal court ruling confirmed these substances are legal hemp products. But Schumer’s bill would change that.

The CAOA would redefine hemp to allow up to 0.7 percent THC, but include all THC and THC isomers in that calculation. That means if you add together all the THC (not just delta 9) in a substance, and the total amount is more than 0.7 percent, the product would then fall into the regulated cannabis space and become subject to the same rules as marijuana flower and delta 9-containing products.

The bill specifically names delta 8, delta 10, and THCA, but offers enough leeway to regulators that any hemp-derived cannabinoid with similar effects could fall under federal regulation. That’s bad news for a lot of people in states where marijuana is illegal, and people in legal states who can’t afford the high prices at cannabis dispensaries.

The CAOA includes hefty federal taxes on cannabis products that will create a huge advantage for black market cannabis growers and sellers. The illegal cannabis market is already humming along nicely, and there is nothing in Schumer’s bill that would threaten its continued success.

The proposed tax structure under the CAOA is different for small and large companies, but with the FDA in charge of regulation, small companies probably won’t survive for long anyway. In a nutshell, here’s how the proposed taxes work:

That means that consumers of legal cannabis products in states with already-high tax rates (many have 15 percent or higher tax rates; Washington’s is 37 percent!), the price of legal cannabis could more than double overnight—and that doesn’t even take state sales taxes into consideration.

If the CAOA passed, many buyers would simply continue to source their weed from the black market, where taxes are low (zero) and regulations are few (none). The burdens on legal cannabis businesses, between adding new taxes to their costs and implementing complex and expensive FDA regulations, would threaten their ability to compete with a thriving black market, which already exists.